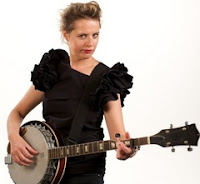 Anne Edmonds in My Banjo’s Name is Steven

Accompanied by Amy Bennett on keyboard and backing vocals, and herself on banjo, Edmonds talks, dances and sings – her vocal range is limited, though her lyrics are sharp – through an hour of stand-up structured around some of her most humiliating experiences to date, including a McLeod’s Daughters-induced break-up, and a disastrous netball trip to Warrnambool which results in one of the show’s best songs.

Five minutes after seeing Edmonds’ show in Townsville last year, we learn, a drunken woman told the comedian that “I didn’t find it funny at the time”. There’s no such risk here. My Banjo’s Name is Steven is instantly, endearingly joyful.

Melbourne Town Hall, until April 22
Tue-Sat 7.15pm, Sun 6.15pm
An edited version of this review originally appeared in
The Age on Tues 3rd April 2012.
Posted by richardwatts at 8:47 am